Note: This article was written by Taylor D. Beck, Editor of The Sand Mountain Reporter. You can visit the link to the original story by clicking here.

Lauren Sisler drew back the curtains on her life beyond the television screen with Albertville High School students Monday morning to provide inspiration and encouragement for students to “embrace your story.”

Sisler, who works as an ESPN and SEC Network reporter, spoke to Aggie underclassmen inside the Albertville Fine Arts Center, sharing her “roller coaster ride” of a journey from Roanoke, Virginia girl, to college gymnast, to rising national journalist.

In 2003, while a freshman at Rutgers University, Sisler unexpectedly lost both of her parents within a few hours of each other to their concealed battle with prescription drug overdose.

“My whole world came crashing down within just a few hours,” Sisler said. “Within two weeks we buried both of my parents.”

When she returned to school, Sisler said she struggled. Once an A-B Honor Roll student, “Cs and Ds became the norm,” she recalled.

Her struggle went on for about a year until she was finally able to pick up the pieces. She graduated in 2006 with a sports broadcasting degree.

Sisler said she was once afraid to tell her story.

“I was always striving for acceptance,” she said. “I wanted people to like me. I was so fearful that people would judge me if they knew what happened to my parents that day on March 24, 2003, because that’s part of my story — that’s part of who I am. So, I struggled with that for so many years.”

Ten years ago, Sisler said, she would not have told her story.

“I ran from reality,” she said. “I told people a sugar-coated story, because I didn’t want people to know what happened to them … that they both died from prescription drug overdoses.

“I couldn’t use the word overdose or addiction in the same sentence as both my parents.”

Her parents died after ingesting a lethal amount of prescribed fentanyl, she said.

Sisler said it took her seven years before she could truly acknowledge how her parents died. She shared words spoken to her by an aunt:

“‘You can’t influence other people’s opinions, you can’t change how your parents died,’” Sisler said, “‘but your parents aren’t defined how they died. Your parents are defined by how they lived their lives.’ And that’s when I realized that now I can carry on their torch, and it’s my mission to live in that truth.”

Sisler said her parents were no different from anyone else.

Sisler described addiction as a scary place to be and implored students choose to “avoid playing roulette and seeing, maybe, it sticks like it did for my parents.”

“You have a choice to make,” Sisler said. “And you know, I think maybe society tells us it’s cool to drink and do drugs. I know social media does … Social media is a platform for some great things, but also it tells us what we want to see and what we want to hear.”

She advised students to use social media wisely, saying there were lots of smoke and mirrors.

Sisler encouraged students to “fall in love” with their individual stories.

“Being a high schooler is not easy,” she said. “I want to encourage you, as you navigate these times, to also embrace the challenges. Celebrate the victories but also hold those defeats close to your heart. Hold each other close to your heart. Be accountable. Take inventory of how you’re feeling. Be vulnerable. Be transparent. Use this as an opportunity to help someone. You’ve got counselors and people here that want to help you navigate through these times … It might save you down the road.

Sisler was able to speak at Albertville High School on Monday through partnership with Mountain Lakes Behavioral Healthcare. 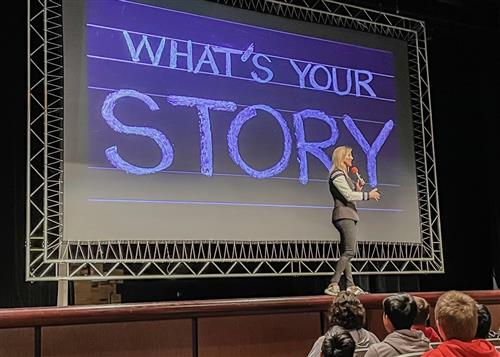 ESPN and SEC Network reporter Lauren Sisler talks to Albertville High School students Monday inside the Albertville Fine Arts Center. In sharing her life story, she encouraged them to embrace their own stories.